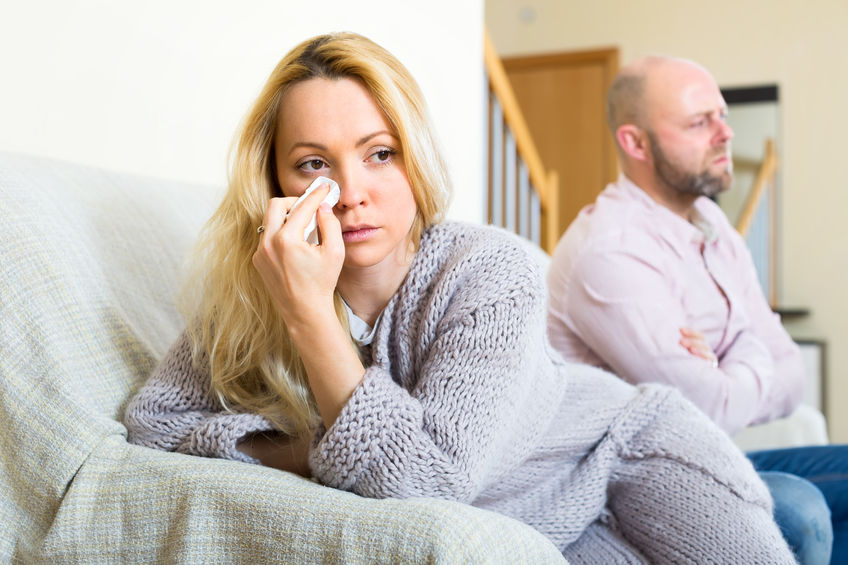 48287767 – sad wife wiping her tears with a handkerchief after a conflict in a family. her stressed husband in sitting in a background

You have to force the issue to a black-and-white choice with your husband: he must choose which one he wants: sexual sin or you. He can’t have both. You, as a beloved daughter of Christ and his bride, will not allow anything less.

What happens in many marriages where a husband has brow-beaten or manipulated his wife into acceptance of his sexual sin is that the wife loses confidence in herself, doesn’t understand her identity, and ceases to treasure the value of their marriage. The enemy does his part and beats her up too.

Then when her hard-hearted husband blames, blows up, denies, or justifies, she backs down. Eventually, she stops fighting and freefalls into despair or depression.

If he starts freaking out and screaming, simply reiterate your position, and if he still keeps going, leave the room or the house. When they’re in that place and keep baiting you, their goal is to draw you into a big fight so they can blow up the smoke screen. Don’t fall for it or get manipulated into taking a rabbit trail that will cause you to deviate from the root issue that he can’t have you and sexual sin.

3. Refuses to get help. Some men may say something like, “Awww, I don’t need help. I can do this on my own.” Yeah, right. If that were true he would have stopped a long time ago. I’ve never heard of a guy who was in bondage to sexual sin who was able to break free without taking the five steps. Many have tried, including me. What it often boils down to is pride: they don’t want to take off the mask in front of others and confess that they’re not the Holy Joe Christian they’ve pretended to be. If he refuses to get help, what he’s really doing is choosing sexual sin over you, which you must not accept.

Photo: Copyright Name: 48287767 – sad wife wiping her tears with a handkerchief after a conflict in a family. her stressed husband in sitting in a background